The family of Georg and Eva Pohl
by Paulina Pohl (U.S.) and Anton Pohl (Brazil)

My father Gjuro (Georg) Pohl, was born in Bizovac, Croatia on May 01, 1908, son of Josip Pohl and Katarina Nuss. My mother, Eva Vestemar, was born in Nasicka Breznica, Croatia on November 03, 1910, the daughter of Gjuro Vestemar and Eva Missbrenner. My parents knew each other from childhood as did their parents.

Georg (17 years) and Eva (15 years) immigrated to Brazil with their respective families where they disembarked on November 30, 1925 from the ship, Gelria, in the port of Santos. Teresija (Pohl) Schulmeister with her husband Antun Schulmeister and Anton Pohl with his wife and children also arrived on this date. Teresija and Anton were siblings of Josip Pohl.

One month after arriving, my father was admitted as a joiner at the General Motors of Brazil, being one of the first employees at this company. His father, Josip, didn’t adapt in Brazil and he decided to travel alone to Argentina, Uruguay and Paraguay, returning later to Croatia. While Josip completed this trip, his wife Katarina returned with her son Mathias to Croatia.

Because of the world crisis in 1929 and the revolution of 1930 in Brazil, my father (against my mother’s wishes), decided to return to Croatia. This happened in July of 1931. They arrived in Croatia and went to live at the house that belonged to my maternal grandparents, Gjuro and Eva Vestemar. The house was at the villa Niza, neighboring Nasicka Breznica. My maternal grandparents were in Brazil where they stayed after their arrival in 1925.

With the money my parents brought with them from Brazil, they built the family home on the land that my father’s uncle had already purchased. After time and with a lot of sacrifice, they were able to acquire more farmland for wheat cultivation, potatoes, etc.

On August 29, 1933, I (Paulina) was born and following me was Georg on September 12, 1938 born. In 1938, my father was drafted for military service in the Croatian army. With   other companions he was captured by the Serbian soldiers who forced them to kneel but thanks to the German airplanes flying overhead, they were able to escape to the forest, some surviving.

With that began the war in 1939. My father, together with other residents of Breznica, was forced to work in Austria. In my father’s absence, my mother Eva, with help of my brother Jose, then 9 years of age, had to work on the fields, plow the lands as well as to take care of the animals and the other farm work.

On June 14, 1941, my brother Adolf was born. Days after his birth, my father was visiting the family and soon returned to Austria. After 14 days of delivering my brother, my mother had to aid with the wheat crop and to do the other work in the house, assuring the children’s survival. My brother Jose, 11 years old then, helped the family’s survival during my father’s absence.

Only in August 1944, was my father able to visit the family. With the war practically lost for the Germans and the attacks of the partisans coming close to the villa and also to Nasicka Breznica, my father was not able to return to Austria. I (Paulina) remember clearly when the partisans arrived robbing the pigs at night, chickens and other groceries, still forcing some residents to accompany them to hiding places from where many didn’t return.

In October of 1944, all the ethnic Germans population of Nasicka Breznica, received orders from the German Army command, to abandon the place as fast as possible. The residents should leave their homes, taking everything that they could carry in their horse wagons, or carry it. After two weeks, several caravans were formed and on October 28, 1944, escorted by German soldiers, we headed to Austria through Hungary.

After the departure all the remaining goods were plundered by the local non-ethnic German residents and also by the partisans. That day it rained heavily and was very cold. Before the departure, my father quickly covered our wagon with cardboard. The wind and the rain soon destroyed the cardboard. 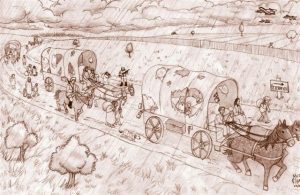 Two days later the caravan was stopped and all the civilians who were able to avoid the surveillance during the departure, were taken off the caravan by the German soldiers so that they could help the other residents at the evacuation. My father was one of those men. Many of these people are still missing. My mother with the children, had to proceed on with the caravan. The caravan arrived to the river Drava that divides Croatia and Hungary. While we waited to cross with the rafts, airplanes from the allied forces were bombarding us. Fortunately, there was not a lot of damage.

We traveled in the daytime and stopped to sleep during the night. Because German soldiers accompanied the caravan, they provided the food for the next stop. That happened because there were several caravans arriving from all directions and many of them had good horses and wagons. They always arrived at the front and consuming the available food.

One very cold and rainy night in Hungary my mother left to seek a shelter for us and she told my brother Jose, to stay with the other siblings until her return. Just after she left, a German soldier approached and asked where our father was. My brother answered that he had been taken off the caravan as already explained. The soldier then went to a nearby house, opening the gates and gave the order for us to enter. The owner of the property opened the window and he screamed so that we didn’t go in.  The soldier then exclaimed:

– “Shut up or I’ll kill you. There are children here who have suffered much already. I hope some other soldier will help my family.”

My brother went out to the street with a flashlight waiting for my mother, desperately searching for her. My mother scolded Jose but after his explanations and also because she did not find any shelter, she went to the soldier and thanked him for what he had done. On that night we slept in a stable at the feet of the horses but were protected from the cold and the rain.

Approximately 46 days later, on December 14, 1944, the refugee caravan arrived in the city of Frohnleiten, Austria, where all the members were directed to the school building under the direction of the Red Cross and of the German soldiers. There were sleeping facilities, a doctor and food. The refugee centre Wagna didn’t exist yet and was created at the end of the war in 1945. The horses were given to the German soldiers. One could no longer look after them. The money received for the animals were deposited in the bank but that money was never paid out because it was used to finance the war expense. The wagons were still with us for a time until we were able to settle somewhere.  Some time later my father found us.

In Austria through the Red Cross we found shelter in a school building. While there my brothers Georg and Adolf became seriously ill. After a long search my father and brother found work on a farm, working as farmers. The war was coming to an end but there were still bombings from the American and English airplanes on the cities.

With the end of the war, my parents and other relatives and inhabitants of Nasicka Breznica, decided to buy new horses and wagons with the intention of returning to Croatia but the Russian troops arrived and they occupied the whole area where we were. They didn’t respect anyone, mainly the women. The women had to hide so they would not be raped. The soldiers also stole everything that they could from the residents to take to Russia. One day a Russian soldier asked my father whom the horses and wagon belonged to that he drove. My father answered:

-“They belong to me and I need them to go back to Nasicka Breznica.”

The soldier then asked that my father take him to the train station with his things. My father granted his request. When arriving at the station, the Russian soldiers confiscated the horse and the coach. My father had to walk back home.  Again my father bought two horses, a wagon and groceries and organized a caravan of approximately 100 wagons. They left for Nasicka Breznica. When we were in the neutral zone (between the borders of Austria and Yugoslavia), a man walked in the opposite direction heading to the border of Austria. He was with a woman and 4 children and crying,  “People, where are you going? Everything was taken from me from by the partisans. Return from where you came from because you won’t be able to return to your houses.” He pointed out that many that returned with him were arrested and sent to concentration camps. Others were sent to the slave labour camps to Russia.

There were four wagons behind ours and immediately behind us was Jakob Missbrenner, (my mother’s uncle), who asked:

-“What is happening Georg?”  My father answered him:

-“I have already been close to death once and I won’t risk my life again and that of my family. I will stay in Austria.”

My father was the only one that believed that man’s words and immediately removed our wagon from the caravan and returned. The other members decided not to listen to the man’s information and they proceeded ahead. Everything that man told us turned out to be true.

We went to another farm where my father and my brother Jose had to work as joiners in exchange for our stay. After they repaired what there was, the owner of the farm asked for the room back where we were staying because he said that his daughter was getting married. It was a shock, because my mother was 6 months pregnant.

With the arrival of the English and American troops, the Russian soldiers left. This changed things for the best. During that time, the Wagna refugees war camp was already in operation and there were my grandparents Josip and Katharina and also dozens of other relatives. Not having an alternative, my parents decided to lodge in the refugees’ camp and received the permission in February of 1946. On May 03, 1946, my twin siblings, Anton and Albert were born.

After the work hours on the farms, my father worked for the church of the camp as joiner, receiving some money for that.  With the opening of immigration, many refugees immigrated to the U.S., Australia, etc. My parents decided to immigrate again to Brazil, where on May 10, 1948, they arrived with the whole family. Very poor, without money but with a lot of determination, they knew how to establish a new phase of their lives in Brazil. Everything that was left in Nasicka Breznica was lost.

Many events during and after the war (violence, cruelty, sufferings, hunger) were not told here with details because they are already similar in content to the explanations that exist on the Hrastovac History Index.