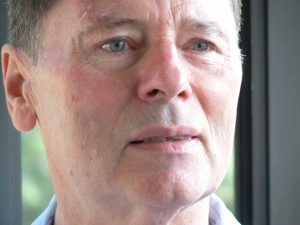 Johann Reidel, Herwig Pimiskern’s grandfather, was taking notes of the villages expulsion trek. He was one of the few villagers in Kapetanovo Polje who could read and write in German and Croatian.

As a group leader of the Kapetanovo Polje refugee caravan Johann Reidel took the safety of all expellees to his heart. The Kepatanovo Polje’s caravan was the only refugee colon that was not bombed by the British air force, even though the planes flew low overhead but they passed by. Herwig’s aunt Christine recounted that they slept under the wagons in rain and snow during the six months route between Kapetanovo Polje and Austria.

There were up to 2,000 people in that caravan at times. Good horses and good wagons survived the flight while others perished.

Kepetanovo  Polje’s refugees  mostly settled first in Austria at Dorf an der Pram  near Scherding. The local farmers needed workers and the refugee needed work to survive. Austrians made the refugees more welcome than destroyed Germany did.

The Reidel-Pimiskern household remained a center of gravity for contact during those times. Many Kapetanovo’s returning soldiers sought there their families whereabouts. Herwig still recalls the trickle of gaunt faces coming and going desperately hoping for news about their loved ones. Herwig in turn desperately hoped that one of those faces would be his own dad, denying the fact that his father was killed in 1942.

On 5th of September 1951 the Reidel and Pimiskerns with others left Dorf an der Pram for Canada. Some of the original Kapetanovo refugees stayed, others went to Germany, Argentina, and the USA.