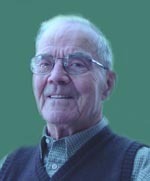 Born to Katharina Bauer Torau and Stefan Torau in Steelton, Pennsylvania in 1918, Stefan was truly a native of Kapetanovo Polje, Yugoslavia in his heart and mind. He was only 1 and 1/2 years old when he, his parents and his older sister Katharina returned to the German-speaking village of his mother and grandparents in 1920. His younger brother Georg was born there in 1921.

The twenty-four years of Stefan’s life in Kapetanovo Polje have provided for countless hours of story-telling. Farming, markets, music, singing, dances, friends and many fond memories amidst family hardships eventually gave way to army service, threats of the Partisans, war, and ultimately expulsion from the homeland in 1944.

By this time Stefan and Margaret Felder had married (Jan. 23, 1941), and they had one son, Stefan (born Jan. 1942), who left with them. A second son Reinhold was born and died in 1943. As refugees with all worldly possessions on a horse-drawn wagon, Stefan and his family traveled through Yugoslavia and Hungary to Austria. Daughter Inge was born en route in Surcin, Yugoslavia.

Immigration to Canada in 1949 brought new opportunity which Stefan and Margaret thoroughly embraced. They worked very hard, lived frugally, and succeeded in building a new and comfortable life for themselves, Inge, and the second Katherine born in London, Ontario, Canada.

Stefan worked at the H.J. Heinz Co. for almost 25 years; he was an avid gardener and a perfectionist in all he did. Faithful to his German roots and Lutheran heritage, Stefan was a Charter member of St. Paul’s Lutheran Church and a founder of the Rhine Danube club. Predeceased by Margaret (June 1996), he will be lovingly remembered as a caring and generous son, husband, father, and Opa by his family Inge, Denny, Stephen and Dina Mesik, and Kathe, Tom, Stephanie and Tonya Davidson.