By Mike and Robbin Teicher

Since the writing of her Family Memoirs in January, 1995, Elizabeth Ochs Teicher, b.1914 Hrastovac, Austro-Hungary; the editors have discovered that the story of the movement of ethnic German people east is more complex than we ever imagined. The following includes a brief summary of what is known about the origins of mother’s paternal (Ochs) and maternal (Kehl) ancestors as of this date.

The Ochs Clan were the first to travel east from Swabia and Franconia (now both a part of Southern Germany) and might have done so shortly after Charlemagne, King of the Franks, defeated the Avars and became a Roman Emperor in 800 A.D.

To secure the eastern front, he built fortresses in the area that would become Austria and eastern Hungary.  Many people over the centuries had passed through this area, but these early settlers from Swabia and/or Franconia were there to stay, as were others who followed them during the next several centuries.

They were known as the Heidebauren, and where they lived was called the Heideboden.  They established flourishing agricultural communities, usually having arrived with nobles, knights, and monastic orders who had received land grants in the Heideboden.  Our Ochses were indentured servants and feudal serfs.

The Heideboden was about 25 miles southeast of Vienna and included the area north and east of the Neusiedler See.  Today the Heideboden would include the village of Winden am See, which is in Austria and only 20 miles east the villages of Heggeshalom and Level, which are in Hungary.

The earliest Ochses in our line that we have been able to trace is Mother’s 5X great grandfather, Johann Heinrich Ochs born in ca. 1695, and later lived in Kalazno, Tolna County, Hungary, which is about 150 miles east from the aforementioned villages.  The family arrived in Kalazno in April 1723 and their descendents ultimately ended up in Keszo Hidegkut, which is only about 10 miles north of Kalazno.  It was from here that Mother’s paternal grandfather, Peter Ochs 1849-1918 and his wife, Maria Schneider, and family emigrated to Hrastovac in about 1868, shortly after our Civil War ended. 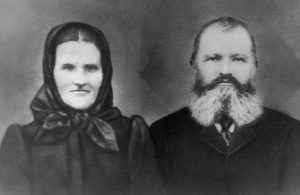 It is important to note that our ancestors who left their Germanic villages so many hundreds of years ago spent most of their time in what is now Hungary before ending up in Hrastovac which was about 110 miles SW from where they lived in Hungary (our research also indicates that the Ochses and Kehls were never more than 20 miles from the Danube except when they lived in Hrastovac!).  Transport would have been by boat or wagon.  I bet families walked beside the wagon at times or just WALKED, like our American settlers did when they went west at about the same time.

Peter and his wife, Maria, and family, as well as our Kehls, were some of the first settlers in Hrastovac (c pronounced like tz), which was then the independent country of Slavonia and is now in Croatia.

This time they purchased land that was part of a large estate.  The land was swampy and was heavily forested just a year prior to their arrival. It had to be drained and the huge tree stumps cleared to make it tillable.  This was difficult work, but our ancestors, and others, who came with them, prevailed.  However, building their homes, fighting malaria, and clearing and tilling the land took its toll causing exhaustion and in many cases death!

Like their ancestors’ villages, Hrastovac became an agricultural community populated primarily by Danube Swabians (“Die Donauschwaben” as opposed to Germans in Germany proper or other ethnic Germans outside of the German Reich), who proudly called themselves this and whose dialect changed little since their departure from southern Germany hundreds of years before.  Remember what is now Germany was made up of many principalities and it was only combined in a state of Germany in 1871.

The people surrounding Hrastovac spoke their own Slavic dialect, which was mainly Croatian or Serbian (there were Serbs in the area as well as Croatians).  Actually, when Mother was born (1914) in Hrastovac, it was in the county of Slavonska Požega in Slavonia. Slavonia shared the Parliament with Hungary!

The Kehls arrived in Hungary during the 1720s from the German state of Hesse, or possibly Baden Wuerttemberg and settled near Kety.  They were among the tens of thousands of settlers during the 18th century who traveled from Ulm or Kelheim on box boats called “Ulmer Schachtel” and “Kelheimer Platten” down the Danube River with the promise of being able to lease land acquired by royalty for farming.  The first of the Kehls in our line who we have been able to trace was Mother’s 4X great grandfather, Jakob Kehl, born in Kety (Tolna County) in the 1720s. 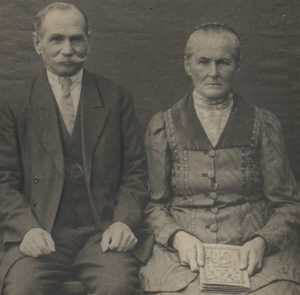 I wonder if the Ochses and Kehls at that time knew each other since Kety is only about six miles south of Kalazno, where the Ochses lived…small world, isn’t it?   Ultimately our Kehls settled in nearby Mekenyes near the villages of Kotcse, Bonnya, Bikal, and Gerenyes.

Mother’s maternal great grandfather, Michael Kehl 1822-1871 and his wife, Anna Maria Elisabetha “Ami” Jung 1829-1895 (who was born in Gerenyes) traveled from Gerenyes to Hrastovac in 1870 with their three sons, Johann, Michael, and Jakob (Mother’s maternal grandfather).  Michael, Sr. died in 1871, and Michael, Jr. the oldest of the sons took over the farm at #28 in Hrastovac.  Four years later “Ami” married Martin Wagner, and Johann and Jakob moved with them to the village of Franjevac, a short distance from Hrastovac.

The movement of ethnic German settlers, our ancestors, is a dynamic story which took place during the rise and fall of empires, and religious and political persecution.  Hundreds of thousands of people were killed and many thousands were tortured, raped, or sold into slavery.  Many of them died in Austria, Hungary, and Turkey.

However, there were periods of tolerance, and our ancestors flourished as farmers and merchants and were devoted Evangelical Lutherans of the Augsburg Confession.  Maybe some of them knew Martin Luther, and if they didn’t, their pastors certainly did because they went to school with him in Wittenberg during the early 1500s.

However, at the end of WWII (1944) our cousins were forced to evacuate their beloved Hrastovac and flee to western Germany.  Many did not make it and ended up in the Russian salt mines (few survived) as slave labourers or were murdered by the partisans of Tito.  Mother’s family was lucky.  They left Hrastovac in June 1921 for Milwaukee.  Their sponsor was my grandfather, Johann (John) Ochs, Sr.’s older brother, Peter.

The descendants of our ancestors who migrated east to Hungary and beyond, so many years ago live now throughout the world.  Today many of our cousins live in Austria, Hungary, Germany, Brazil, Canada, the United States, and maybe a few in Croatia.

For those who are interested in finding out more information about the migration of Germans of the 17th, 18th and 19th centuries are encouraged to read Henry A. Fischer’s book Children of the Danube, published in 2004 by AuthorHouse,www.authorhouse.com or Hrastovac-Eichendorf eine deutsche Siedlung in Slavonien by Erwin Englert, the teacher in the school in Hrastovac between 1913 and 1925 (our Aunt Mary’s teacher!), available from Hrastovac researcher, Eva Mueller.  You can also type in Hrastovac on Google to see what happens—you may be surprised!

Also, if you are interested in finding the locations of the aforementioned villages on a map (including Hrastovac): Freytag and Berndt have published an excellent map of Hungary, which can be purchased at Barnes and Noble Booksellers.  You can also try your luck on the Internet, as well as here on the www.hrastovac.net pages.

Many thanks to our friends, Tony Hamilton of Milwaukee, WI, an Ochs, and also a descendent of Peter Ochs 1849-1918 and his wife, Maria Schneider; Ron Berg-Iverson of Surrey, British Columbia, who married a Kehl who is a descendent of Michael Kehl 1822-1871 and his wife, Anna Maria Elisabetha “Ami” Jung 1829-1895; and the Rev. Henry Fischer of Oshawa, Ontario, an ELCA minister, (Henry’s kin lived in Hrastovac and Hungary) all who made the tracing of our Ochs and Kehl roots possible.

The above information about our ancestors is documented, primarily by using church records.  The documentation was a long and tedious job for everyone, especially for those who transcribed the records and often had difficulty reading the script.  The churches, both Catholic and Lutheran, kept birth, baptismal, confirmation, wedding, and burial records, including the names of witnesses, sponsors, and clergy. 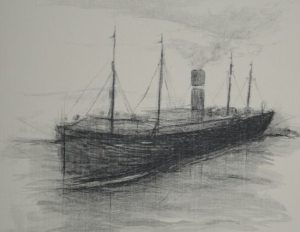 The S.S. SamandThe ship that the Ochs family took when they immigrated to Milwaukee, WI in 1921.