The Thirty Years’ War was preceded by the election of the new Hapsburg Holy Roman Emperor, Ferdinand II, who tried to impose religious uniformity on his domains, and forcing Roman Catholicism on its peoples. 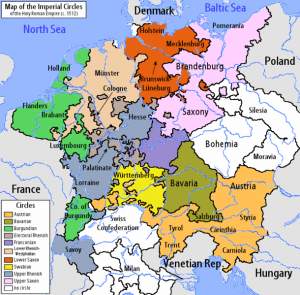 It was fought primarily in Central Europe between 1618 and 1648. The northern Protestant states, angered by the violation of their rights to religious freedom, which had been granted in the Peace of Augsburg that was signed in that imperial city in 1555, joined together to form the Protestant Union known as the “Union”.

Ferdinand’s policies were considered strongly pro-Catholic and anti-Protestant, as he was a devout Roman Catholic and much less tolerant than his predecessor, Rudolf II. Rudolf II ruled from the largely Protestant city of Prague, the very city in which the infamous Defenestration (Fenstersturz) occurred, which was the spark that started that three decades long war, one of the most destructive conflicts in human history, and resulted in eight million fatalities not only from military engagements but also from violence, famine, and plague.

The casualties were overwhelmingly and disproportionately inhabitants of the Holy Roman Empire, most of the rest being battle deaths from various foreign armies.

For three decades the deadly clashes ravaged Europe. Of the total population of Germany 20 percent died during the conflict and there were losses up to 50 percent between Pomerania’s Baltic state and the Black Forest, the southwestern corner of Germany.

In the beginning it was a war between various Protestant and Catholic states in the fragmented Holy Roman Empire, but gradually developed into a more general conflict involving most of the European great powers. These states had relatively large mercenary armies, and soon the war became less about religion and more of a rivalry between France and Habsburg’s Emperor for political pre-eminence of Europe. 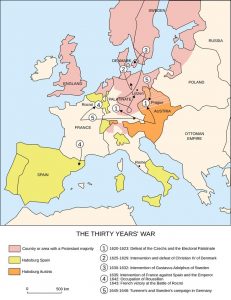 After the so-called Defenestration of Prague deposed the Emperor’s representatives in Prague, the Protestant estates and Catholic Habsburgs started gathering allies for war. The Protestant Bohemians ousted the Habsburgs and elected the Calvinist Frederick V, Elector of the Rheine Palatinate as the new king of the Kingdom of Bohemia. Frederick took the offer without the support of the Protestant Union that angered the southern states, who were mainly Roman Catholic.

Led by Bavaria, these states formed the Catholic League to expel Frederick in support of the Emperor. The Empire soon crushed the perceived Protestant rebellion in the Battle of White Mountain, executing leading Bohemian aristocrats shortly after, which the Protestant rulers across Europe unanimously condemned.

After the atrocities committed in Bohemia, Saxony finally gave its support to the Protestant Union and decided to fight back. Sweden, at the time a rising military power, soon intervened in 1630 under its king Gustavus Adolphus, transforming what had been simply the Emperor’s attempt to curb the Protestant states into a full-scale war in Europe. Sweden’s king Adolphus, also called “The Golden King” and “The Lion of the North”, made his country one of the great powers of Europe, in part by reforming the administrative structure. He began parish registration of the population, so that the central government could more efficiently tax and conscript the people.

Habsburg Spain, wishing to finally crush the Dutch rebels in the Netherlands and the Dutch Republic (which was de facto independent since 1581 but de jure still a part of the Holy Roman Empire), intervened under the pretext of helping its dynastic Habsburg ally, Austria. No longer able to tolerate the encirclement of two major Habsburg powers on its borders, Catholic France entered the coalition on the side of the Protestants in order to counter the Habsburgs.

The year 1618 marks not only the beginning of the 30 years of war, but in the Lorraine’s town of Schaumburg also beginning of the witch-hunt period. Alone that year 13 women and men have been sentenced to death in that town because of “conjuring magical tricks”. One victim was Johannes Schu of Imweiler, who with two other defendants was burned as a witch on 26 September 1618.

The Thirty Years’ War devastated entire regions, resulting in high mortality, especially among the populations of the German and Italian states, the Crown of Bohemia, and the Southern Netherlands. Both mercenaries and soldiers in fighting armies traditionally looted or extorted tribute to get operating funds, which imposed severe hardships on the inhabitants of occupied territories. The war also bankrupted most of the combatant powers.

The Dutch Republic enjoyed contrasting fortune; it obtained independence from the Holy Roman Empire and also from Spain (which had directly controlled the Dutch lands despite it not being part of the Holy Roman Empire) thus concluding its 80-year revolt against Spain. It subsequently enjoyed a time of great prosperity and development, known as the Dutch Golden Age, during which it became one of the world’s foremost economic, colonial, and naval powers. 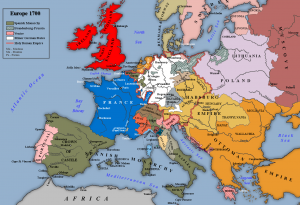 The Thirty Years’ War ended with the Treaty of Osnabrück and the Treaties of Münster, part of the wider Peace of Westphalia. The war altered the previous political order of European powers. The rise of Bourbon France, the curtailing of Habsburg ambition, and the ascendancy of Sweden as a great power created a new balance of power on the continent, with France emerging from the war strengthened and increasingly dominant in the latter part of the 17th century.