Three great wars started in Prague, the capital of Bohemia: the Hussite’s Wars (1419-1434), the Thirty Years War (1618-1648) and the Second World War (1939-1945). The first defenestration (throw-out the window) occurrence of the city of Prague was caused by the exasperation in Protestant Czech’s part of Prague as well as the farming country of Bohemia to erupt because of the execution of its religious and national leader Jan Hus and gave the signal for a general German-Bohemian persecution. 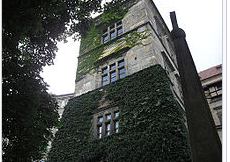 In all the great German and European wars going back to the Middle Ages, much Germanic blood flowed on Bohemian soil, the country in the center of Europe, where the Slavic and Germanic population overlap. During the Hussite Wars (1419-1434), Hussite Bohemian-Czechs routinely defeated several armies until Emperor Sigismund succeeded in overthrowing the radical Taborrites in the Battle of Lipan (east of Prague) with the support of the moderate Hussite party. Thus finally ended the bloody war that was of a great loss to the Bohemian-Germans. In the country itself as well as in the neighbouring countries, the inhabitants of numerous German-Bohemian cities and villages had fallen victim to the murders and plunder of Hessite rulers, the Germanic population of the country melted down to remnants. Most of its German citizens were squeezed against the border to the North and West, which was an area unusable to the Czech farmers, but a rich mineral source for the German craftsmen.  Eventually they traded the German made metal plows to the agricultural Czechs in the plains.  And this gave both an interdependence as they never had before.

After the abbot of Braunau had a Protestant church closed that stood on the grounds of the monastery, the Protestant noblemen used this as an excuse to break with the emperor Matthias, who was also king of Bohemia. They claimed that the Catholic party had violated the “Majestaetsbrief” (the right to freedom of Religion), and threw two imperial officials, including a scribe from the window of the imperial office, in the Prague moat. 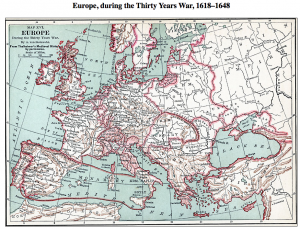 Although Prague’s Second Defenestration occurrence that started the Thirty Year’s War was less bloody than the first one, it also provoked a war in which a great deal of blood flowed and the raiders and plunderers by the Army together with the expulsions of Czech-Bohemians as well as the German-Bohemian citizens for the sake of Religion weakened the people’s power and inflated massively the rule of the noble Landlords.

The Protestant Bohemian states after the second throw-out the window occurrence in Prague in 1618 cut the connection with the Emperor and joined the Protestant Nobility group, the “Union”, in the Protestant parts of German Principalities. For the leader of the Union they elected the Elector Friedrich V. of the Palatine, to the king of Bohemia. In the meantime the rightful Bohemian king, Emperor Ferdinand II, joined forces with the Bavarian Duke Maximillian, the leader of the “Liga” of the Catholic Nobility against the Palatine’s Ferdinand II.

Because they deposed a rightfully chosen king, the Protestants were not able to gather support from surrounding nations, so just two years after what is known as the Second Defenestration, the Catholics and the Emperor Ferdinand II regained power on 8th of November 1620.

Following the battle there was plundering and pillaging in Prague for weeks. Twenty-seven nobles and citizens were tortured and executed in the Old Town Square several months later. It contributed to the resentment that gave even more rise to the Thirty Years’ War.

In the thirty years war, Bohemia was so depleted of ALL their population that in some  areas there were only 80 percent of the population left due to  the menacing bubonic plague. This forced the Bohemian King to take a census in 1651 to establish how many landholders and property owners there were left to see if taxes could be raised to save the Kingdom.   These records exist to this day and are called “Berni Rula”.

There is no report about a defenestration occurrence in Prague, the capital of Bohemia, now known as the Czech Republic, that started the WWII.