The year 1945 hit the Germans with a terrible  and devastating catastrophe in its political history, specifically the ethnic Germans of East and Central Europe. Flight, eviction, expulsion and abduction scattered them in all wind directions. For example, the Danube Swabians, the ethnic Germans newest tribe, fled who could to Austria and Bavaria, others were abducted as slave labour to Russian coal mines and others still ‘relocated’ on the basis of the Potsdam Agreement in the Russian and the American zone of Germany. 12 million refugees arrived in totally devastated Germany after World War II. From there in the years to come many went overseas, to the United States, Canada, Australia, Brazil and Argentina. It threatened the complete dissipation, dissolution and annihilation of the Danube Swabians.

In West Germany during the years 1945 to 1949, individuals and organizations tried in many different ways to counteract this process by establishing new settlements through co-operative involvements, thereby creating new home towns for the ethnic German refugees.

One of the Organizations was the “Protestant Help Organization” (Evangelisches Hilfswerk) for the ethnic Germans from Hungary. In the West Germany’s state of Hesse it was under the direction of Dr. Irma Steinisch. Later Heinrich Derner, a native of Hidas, Baranya, became the first director and the driving force of “Ungarndeusche Bau- und Siedlunggenossenscahft eGmbH” in Darmstadt.

The decisive help and support came from -at that time- the mayor of the city of Darmstadt, his honour Ludwig Metzger. Together with the Lutheran World Federation he provided the building land and the first financial start-up for the purchase of construction material but the manual labour and the know-how had to be provided by the future house owners themselves.

The refugees, who decided to join the project, lived not only locally but also in different parts of West Germany and needed in Darmstadt accommodation for themselves as well as for their families but also a job. As the city of Darmstadt was totally destroyed, rental accommodation were non-existent, and jobs of any kind were most difficult to obtain. Since the prospective settlers neither had money nor living accommodation nor a job, the project appeared to be a huge risk.

The uncertainty was high and a decision difficult for the people to make, especially since one still hoped that there was a chance of returning to the old Heimat. Finally on 19th of April 1949 the decision was finalized at a meeting at the community hall of the Evangelishes Hilfswerkes in der Waldkolonie (a forested suburb of Darmstadt), and the “Ungarndeutsche Bau- und Siedlunggenossenschaft eGmbH Darmstadt” was born.

The objectives of the cooperative was set by Dr. Irma Steinisch: the settlement should follow the example of the old homestead settler rules from the 1930’s, in cooperation with the help of many family members and with the least possible foreign resources, to minimize the costs.  Self-help was the primary motto.

Eventually the planned semi-detached houses to be built on about 800 to 1000 square meters of property would some day become the ownership of the settlers. War widows, disabled people and old people who were unable to work on their own, should be includes as Einlieger (granny quarters). As most of the co-operative members of the non-profit organization could not raise the required deposit of DM 300, they had the possibility of a monthly instalment payment of DM 10.00.

On 17th of November 1949 a settlement agreement between the city of Darmstadt and the “Genossenschaft” (The Co-operative) was signed, to be retroactively valid to 1st of April 1949:

– The city gave the “Genossenschaft” a plot of forested land of approximately 110,000 square meters for the construction of a settlement.

– After the completion this land had to be deeded to the settlers.

– The trees on the forested property were given to the “Genossenschaft”, to be used by the settlers as building materials.

– The construction of the roads, paths, and parks were to be created by the city, the labour was the responsibility of the “Genossenschaft”.

– The “Genossenschaft” was responsible for the provisional accommodation of the settlers.

– The settlers had to be predominantly from the building trades.

The “Genossenschaft” was obligated and the city was entitled to use its settlers, as long as they are not actively participating in the construction of the settlement, for the rebuilding of the city – of course under a regular employment agreement.

The ground-breaking ceremony quickly followed and on that day, the 25th of April 1949, the following families were already members:

By the middle of 1950 additional 350 members joined the “Genossenschaft”.

The first crew of 40 men received accommodation in the barracks of former Women’s prison in the Rhein Street, and were joined a few months later by  few female cooks, who prepared the meals. Fortunately some of the settlers found work in the city, and after the end of their working day continued working at the construction project until 9 p. m. or later, Sunday mornings included.

The first stage of construction – or “Schub”(thrust), as the construction crews were also called – started work immediately: First trees were cut, then basements excavated and the paths trampled down. Foundations, masonry, roof and floor work, plastering the interior, etc. were created by settlers themselves. Only the windows and doors as well as the electrical installations were made in the factories. There were no machinery to work with, trowel and hammer, shovel and wheelbarrow were all the tools the first crew had to work with. That changed in due time by purchasing concrete mixers as well as lift pulleys for the heavy loads.

One of the members in the first phase was Jakob Schmidt of town of Alsonána in the County of Tolna in Hungary. Back home he was a farmer, but to qualify for that project he quickly learned the bricklayer’s trade.

Even though most of the men were farmers or tradesmen, the beginning was most difficult. Friendly help delivered a group of Mennonites of varios European countries, who helped four weeks long dig out the basements, as well as volunteers from the former internment camp in Darmstadt.  Even so there were many difficulties to overcome but eventually one house after another stood ready for occupancy. 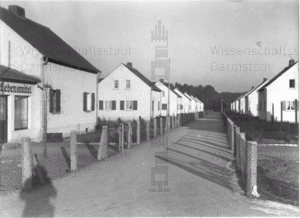 More than a year later with hard work and great cooperation, in October 1950, 38 settler homes and as many granny quarters were ready for occupancy. Each consisted of one bedroom, a kitchen and a full bathroom. The homes were raffled out and handed over to the individual settler families during a dedication ceremony.

Eventually there would be nine such“Schubs”in that location stretching over two decades. There were other similar co-operatives spread across West Germany. It brings back to mind the history of our ancestors on the Pannonia plains, when they too started from scratch.