In June of 1920 revised boundaries were formed at the Treaty of Trianon for Greater Hungary. The Swabian villagers whose families had lived in Hungary for over 200 years were now in three different countries.  The post-war treaties contained clauses, which protected the ethnic Germans. The pressure by the new Hungarian government to assimilate, specifically urban areas, was immense. To hold any government job at all, like teaching, working for the railroad, etc. was only permitted if the individual’s name was changed to Hungarian. The pressure of assimilation in the agricultural communities was less so and most of the Danube Swabian villages preserved their unique ways keeping their customs and language. 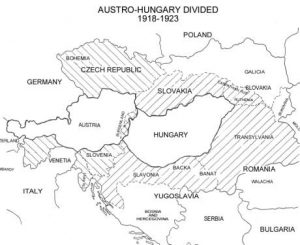 That the Danube Swabians could live for centuries in peace and harmony among the most volatile people in Europe is an attestation of their boundless tolerance and humanity.

After the 1944 forced expulsions from their ancestry lands, the Danube Swabians were ‘blown’ in all corners of the world.