RECOLLECTIONS FROM A SMALL CHILD’s PERSPECTIVE

By HELGA HIRSCH and  ERIKA HIRSCH 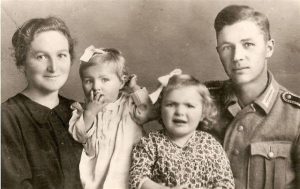 During this sad and tragic time of the expulsions we were 4 yrs. and 2 1/2  yrs. old. Ethnic Germans were stripped of all possessions and driven out of the village of Velika Greda (Georgshausen).  Mom was sent to Russia to work in slave labour camps and our dad had still not returned from the front.

Small children and old folks were evacuated from their homes and sent to neighbouring villages where the situation was just as tragic.   We were boarded on a cattle car and sent off to the Rudolfsgnad concentration camp, a large barn-like structure with straw scattered over the floor.  This was to be our living quarters for approx. 2 1/2 yrs (1945 to 1947)???. There were massive numbers of people and we all were allotted a spot on the floor where we slept, ate and spent the long lonely days.  Grandmother Hirsch, cousin Peter Bajerle, Erika and myself (Helga), were together. We were always hungry and the pea soup with the black bugs (slop) did not go very far, nor did the thin cabbage broth.  Eventually we learned that if we scoured the ground outside, we would find apple cores and other tidbits that had been thrown away or dropped (most likely by the guards).

The fateful day came when our grandma died.  Neither Erika nor I recall our feelings at the time, most likely because we were too young to understand the meaning of it all.  We were now considered ‘Orphans’ and this meant that we were going to be moved to another facility, which turned out to be (an orphanage in) Skopje, Macedonia.  We were located there for one year.  Cousin Peter was transferred elsewhere as boys and girls were separated.  When we arrived in Skopje we were stripped of our louse-infested clothing, which were burned in an open fire and were replaced.  Our hair was shaved and the de-lousing began; this consisted of dousing of benzene over our louse-bitten scalps.

Some time during 1949 (in Skopje) Erika and I were also separated and Erika was sent to Prilep and I to Kumanovo both in Macedonia.  The two of us were not to meet again until spring of 1951. The parting was awful and painful.  Erika cried and clung to me.  I was trying to be the big brave sister and tried to console her by telling her what they had led me to believe, ‘that we would be seeing each other soon’.  Of course that was not to be for another couple years. Eventually we both forgot about each other and life went on.

Life seemed to turn for the better in Kumanovo’s orphanage. There were some older girls (by as much as 6 yrs.) These girls were given a little more privilege and looked out for the younger girls.    One of these older girls was Maria Milowan and she knew me from back home.  She took me under her wing, as I was one of the youngest.  Maria now lives in Germany and I am in touch with her. She has assisted me in the gathering of a lot of this information and has filled in the years for me as best she could to her recollection.

Even though conditions were improved and the food somewhat better, we were still lonely and were deprived of all the pleasures that small children should have.  We had no toys, books, games, etc. We learned to amuse ourselves outside in the large yard by playing hopscotch and other such games that we made up as we went along.  We learned songs from each other; some that both Erika and I still remember and can still sing them in Macedonian  (even though we no longer speak the language).  We were 2 -3 persons sleeping in a single bed.   No bedtime stories were ever told.  Our native language (German) was strictly forbidden.  Talk of family was non-existent.

We wore a navy blue tunic with white blouse to school. We marched 4 abreast and sang Partisan songs.  The children from the outside world taunted us and called us bad names, which we did not understand nor did we understand the reason for this. All we knew is that ‘German’ was a bad thing.

The ritual was always the same, every morning we had to line up in the huge yard for a face wash in the huge basin filled with cold water.  This followed with exercise sessions. We don’t recall ever having a bath.  Frequently we were surprised by the dreaded call for a de-lousing session.  We partnered-up and sat amongst the ruins in the huge yard and checked each other’s head for lice.  If lice or scalp sores were found our head was shaved and benzene poured over it.

There was no celebration of Birthdays or Christmas, etc.  When some dignitary came to oversee the situation at the Orphanage we were assembled, standing in salute while singing Druze Tito. This is one time when we got a special treat, ‘a slice of white bread’ …what a delicacy!

There was no joy or excitement when told that we were going to be re-united with our sister and mother…. What is a ‘sister or mother?’ We did not know of such a person and the words were never spoken.

During spring 1951 Erika and I were re-united in Kumanovo with the purpose of being transported to Germany to meet our mother.  After the papers were processed in Belgrade we were put on a train.  We were given a coat and a small suitcase.  I don’t know what the contents were in this little suitcase, and as we recall, it never occurred to us to check it out.   There appeared to be a male escort with us but he did not speak with us or explain to us where we were going.  We were frightened of the uniformed officer who approached us during a brief stop at some border crossing. Erika and I never spoke of what is ahead of us; we were ‘strangers’ to each other.

On April 17, 1951 we arrived at the Refugee Centre in Kornwestheim, Germany where we were told that our mother would be picking us up.  Neither Erika nor I were overjoyed, excited or anxious.  There was only ‘acceptance’ and suspicion.    When mom appeared we were non-emotional and had a feeling of detachment.  She meant nothing to us!  I believe that is because of all those years of not being allowed to question or show emotion.  …. You did what you were told to do without questioning. There was apprehension about leaving the Orphanage…how could there not have been that, after all, we felt safe in the confinement of this enclosed camp.

We were in Germany for approx. 1-2 yrs. from April 1951 to Dec 17, 1952. We soon discovered our mom to be a very loving, warm and caring person and learned to love and respect her tremendously. 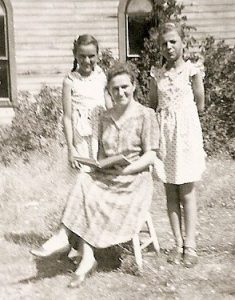 In Dec. 1952 we boarded the ship SS Neptunia that brought us to the shores of Halifax, Nova Scotia.  We traveled by train to Grand Forks, B.C. where our Uncle Nick who had been living in Canada for several years met us.