By the end of the 19th century the Osmanen Empire (Turkey) started falling apart. The grip, which they held on Bosnia and Herzegovina for 400 years, came to an end by 1878 and those two former Turkish provinces came under Austro-Hungarian administration at the Treaty of Berlin in that year. 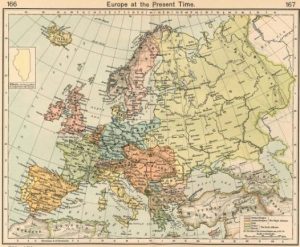 Prior to the change of the administration from Turkish hands into Austro-Hungarian, back in the year of 1869 the Trapist monks from the Eifel Region in Germany established the Maria-Stern monastery in the Verbas valley under the leadership of Franz Pfanner. Through the ravages of 400 years of Turkish occupation it was almost an empty land with a few Croat, Serb and Muslim localities. After the change of the administration those Monks advertised for German settlers in North-West of Germany, who established the first German settlement along the road between Bosanska Gradischka on the Sava River and Banja Luka, which is in the center of Bosnia. They called the settlement WINDHORST, after a politician of those times. The name changed during the Yugoslavian times to NOVA PALANKA and was changed back again into WINDTHORT after the fall of Yugoslavia in 1992.

The settlement of RUDOLFSTAL was also established a year later, along the same road with the settlers from Silesia, Hanover and Oldenburg areas of Germany.

Both Windhort and Rudolfstal were established on private lands with private initiatives.

In 1885 the first Danube Swabian settlers from Fanzfeld in the Banat established BIJELINA, and a year later 91 Donauschwaben Lutheran families from Franzfeld established the daughter settlement of FRANZ-JOSEFSFELD. All the newcomers so far purchased their own fields and homes.

Having observed the good progress of those fully private settlements, the Austrian administration decided a decade later to follow the same settlement principles as when settling Banat 150 years earlier.

The new settlements were preplanned, with each family receiving 10-12 hectares of newly cleared land. The prospective settlers had to prove that they also had other skills besides farming, had exemplary life styles and needed 1,200 Kronen of cash to start with.

The lease was free for three years. By the forth year the lease started at 1 Kronen for the homestead. After 10 years occupation it would be owned outright by the occupant.

The villages were established in the groups of 30 families all over the Bosnia with hardly any roads connecting them to each other. Branjevo on the Drina and Brezovopolje on the Sava were established by the Lutheran Batschka Schwabians, but both villages were not successful and were abandoned after WWI. Others thrived, like Koenigsfeld/Dubrava, Troschelje and Karlsdorf/Karadjordjevo, Prorara and Vranovac. 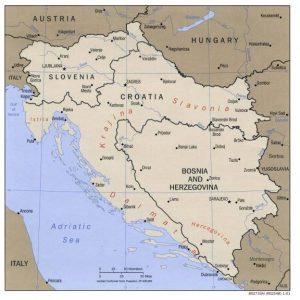 After the annexation, German industrialists were quick to move into the area and established many logging camps and saw mills, wood based factories, as well as mining industry. With them the factory workers arrived too and more settlements quickly grew around those employment centers.

By 1941 thirty of these newly established places had German speaking schools, some private, some public.

However, it was pioneer time all over.  Just like their Danube Swabian ancestors pioneered first in the Swabian Turkey, Banat and Batschka in the beginning of the 18th century, later expanding to Syrmien and Slavonia and 200 years later their descendants became pioneers all over again, now in Bosnia.

The time of peace was running out. WWI (1914-1918) slowed down the progress of those settlements. Austro-Hungarian administration was busy with other demands and the settlers in Bosnia felt rightfully forgotten.

After the division of Austro-Hungarian Empire in 1918, Austro-Hungary was divided on eight different states. Bosnia and Herzegovina ended up part of the Kingdom of Serbs, Croats and Slovenes. Our Bosnia-Donauschwaben felt completely isolated and disadvantaged under the nationalist movements between the Serbs and the Croats and the envious hostilities towards them increased dramatically.

By 1942 it was evident that the ethnic German population in Bosnia had to be evacuated. Even though quite a large percentage of the Bosnian Donauschwaben came originally from Austria directly, Austria did not accept them back.

Instead the German government made an agreement with the newly formed Yugoslavia that each settler will be compensated for the assets, which they would leave behind. In turn Germany promised to resettle the Bosnia-Donauschwaben people in the German Reich.

Some 17,360 Bosnia-Danube Swabians arrived on 31st of December 1942 in Litzmannstadt (now Poland), where refugee camps were established. They automatically became German citizens. Of those 57,9% were Roman Catholic, 41.4% were Lutheran and Reformed, and .07% belonged to other religions.

All older boys and men were to report voluntarily to the Waffen-SS immediately. Males who refused to volunteer were put under emotional pressure.

The German administration intended to resettle those Bosnia-Danube Swabians along the newly formed boarder with the Soviet Union as Soldier-Farmers, copying the very same idea, which Austrian Emperor Carl VII used in the Military Zone some 250 year earlier. Quite a few of the Bosnia-Donauschwaben took possession of farms there, but as we know within a year, the winds of war forced them to be on the run again.

This times each family at its own initiative and expense. Since all of them already had German citizenship, most who survived the WWII war atrocities settled in Germany after the war.

Today they live in over 400 places all over Europe and the Americas.